Your gifts to the Annual Catholic Campaign educate our seminarians

Home » Your gifts to the Annual Catholic Campaign educate our seminarians 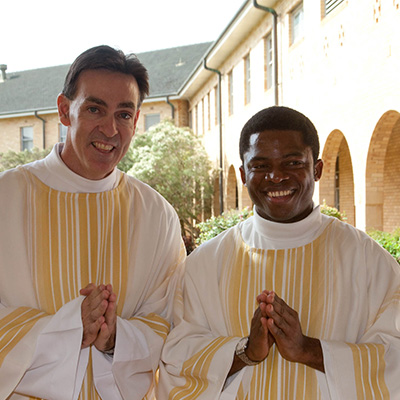 People sometimes ask me if life as a priest is… Our Church is changing. In some really big ways, but… A safe place to learn and grow

What is the first feeling the word ‘mum’ creates in…

“A GOOD SHEPHERD a pastor after God’s heart, is the greatest treasure which the good Lord can grant to a parish, and one of the most precious gifts of divine mercy,” said St John Vianney.

Your contribution to the Annual Catholic Campaign helps to educate our future parish priests at Holy Spirit Seminary. With your gifts, your prayers and your encouragement you provide for the formation of Catholic men who will love and serve our Church for generations to come.

Redcliffe City Associate Pastor Fr Bryan Roe remembers two dates in particular of his journey towards ordination to the priesthood. In June 2010, this humble man and former tennis star was ordained to the transitional diaconate with fellow classmate, African-born John Echewodo.

“We were great mates,” Fr Bryan said of that time, recounting meeting Fr John, now parish priest at Coomera, when they were first in formation.

On the Feast of the Immaculate Conception, December 8, 2010, the then deacons presented together to St Stephen’s Cathedral, Brisbane, for ordination to the priesthood. Archbishop John Bathersby said to congregation. “Bryan and John are typical of the multicultural mix of the Church today, Armed with wisdom and scripture they will … go forth to engage the world.”

Fr John Echewodo returns the admiration. “My brother priest, Fr Bryan Roe, and I shared the same ordination and he will be my brother forever. With all the guys that were at the seminary we will support each other for life. Nigel, Nev and all the guys that were there… we formed lifelong friendships. It was quite funny at the time, I was from Africa, Nev from Papua New Guinea, Bryan from Australia, Nigel from India – it was almost like the United Nations at Banyo.

Thinking back, Fr Bryan said what he “loved most” about the seminary “was being there with men of faith”.

“It’s quite a secular society we live in,” he continued. “In the seminary, I developed friendships with people who have the same beliefs. Praying together, studying together and being on the same journey – it was a special time.”

Feature image Well loved priests: Bryan Roe and John Echewodo pictured at their ordination to the transitional diaconate on the way to becoming priests for the Archdiocese of Brisbane.

Donate to the Annual Catholic Campaign