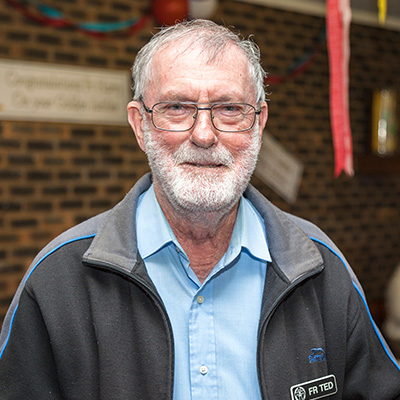 RETIRED FR TED HOULIHAN remembered a time “priests died in the presbytery” without the care they needed in old age.

Living alongside other retired clergy near St Thomas the Apostle Church, Camp Hill, the 85 year-old has “deep gratitude” to those who financially and prayerfully support the Priests Foundation.

“The support of the foundation allows us retired priests to still contribute. We can support parishes and at the same time be motivated to stay active,” Fr Ted said.

Ordained in 1961, Fr Ted worked for eight years before entering the seminary. He was “a pencil pusher” at the then South Brisbane Auxiliary Hospital, Woolloongabba, now known as the Princess Alexandra Hospital (PA).

Nowadays Fr Ted visits the sick and mentally ill at the PA on a weekly basis.

“Being active in retirement means a pool of priests can be called upon to help if another priest is sick or going on holidays,” he said. “It’s very stimulating to still be able to be part of something greater.”

Agreeing he doesn’t look his age and “with longevity running in the Houlihan family”, Fr Ted said he’s committed to continuing to contribute to the spiritual life of the Church and her people.

With your support of the Annual Catholic Campaign you come to the aid of our retired priests when they need it most in their lives. Your gifts enable to the Campaign enable the Priests Foundation to provide for the accommodation and medical needs of our most senior pastors who live on their own, in assisted living facilities or in nursing homes.