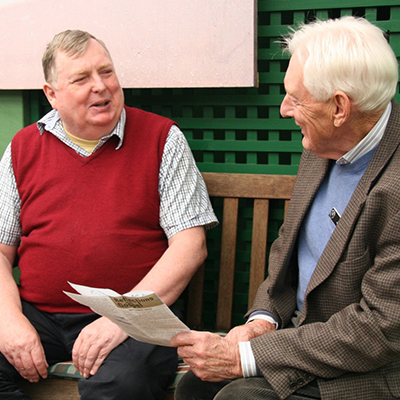 21 years ago Jim Noonan saw a notice in the parish newsletter that caught his attention.

The notice was about a training course for pastoral carers offered by Centacare’s Catholic Psychiatric Pastoral Care (CPPC).

The training course is run each year by Mrs Janine De Maria, coordinator of CPPC and registered Mental Health Nurse, and Fr Jim Smith, a priest of the Archdiocese of Brisbane. They take 12 new carers each year and conduct the course once a week over 6 months. Trainees are thoroughly prepared to a high professional standard to ensure that they can assist with CPPCs various ministries:

Jim, then a veterinary surgeon, applied and was accepted into this one-of-a-kind course.

He became one of 90+ pastoral carers that staffs these ministries. Initially Jim worked on Mondays in The Centre, but since retiring he has undertaken hospital visitations once a week and regularly helps out on Fridays with the Catholic Companionship Program. Like the other pastoral carers Jim is not paid for this work, he selflessly gives his time as an entirely voluntary commitment.

Having already had some experience in pastoral care Jim came to realise that what was most unique about Catholic Psychiatric Pastoral Care was that it aimed to be both therapeutic and pastoral.

Since walking through the door many years ago Jim Noonan has been a great companion for Justin Houghton, a CPPC member. They are pictured together reflecting on the liturgy for the coming Sunday.

Justin has shared with Jim how as a boy he, “grew up in a Catholic home and loved reciting the rosary together with my family“. But changes and some of the new movements in the Church started to leave Justine confused. It was particularly special for Justin to be introduced to CPPC by a friend who was already a member. Here Justin rediscovered all the beautiful traditions of the Catholic Church, the treasures of his childhood, in particular, “the Mass, the rosary, the Saints, the seven Sacraments. And I know now that this its the place to be, my search has brought me back home.”

What most of us never realise is that Psychiatric illness commonly isolates suffers. From his first-hand experience Jim has seen that, “they can be isolated from family, from friendships, from job opportunities, from community and most significantly from their faith community. Those suffering mental illness are definitely included as part of the poor in God’s people.”

Pope Francis pinpointed the issue in a profound and accurate way when he wrote:

I want to say, with regret, that the worst discrimination which the poor suffer is the lack of spiritual care. The great majority of the poor have a special openness to the faith; they need God and we must not fail to offer them his friendship, his blessing, his word, the celebration of the sacraments and a journey of growth and maturity in the faith. Our preferential option for the poor must mainly translate into a privileged and preferential religious care.

– Apostolic Exhortation Evangelii Gaudium, The Joy of the Gospel, (200).

Jim Noonan firmly believes that this has been the strength of CPPC: since it was first founded 30 years ago, Fr Jim, Janine and the dedicated volunteer staff have worked tirelessly to address this lack of spiritual care for those suffering mental illness.

Catholic Psychiatric Pastoral Care is one of Centacare’s six Pastoral Ministries which reach out to the mentally, the hospitalised, the imprisoned, local Aboriginal communities, and seafarers whose work brings them to our shores after many at sea away from their families and Church. Centacare Pastoral Ministries receive little to no funds from the government and rely on donations from the Catholic faithful for support.